In places where the waves are well suited to surfing, you’ll often find board surfers. Knowing their rules of etiquette will help you avoid collisions with them and keep the peace at the break. 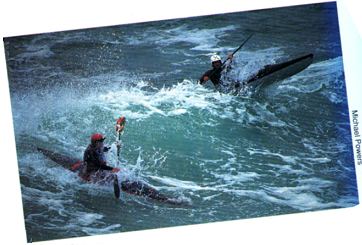 Kayak surfing in the ocean is growing in popularity. For some kayakers, it has become a sport of its own, involving advanced maneuvers in highly specialized ocean surf kayaks.

For other kayakers, it’s a way to sharpen skills while providing a fun diversion. Unfortunately, many cruising kayakers come into conflict with surf boarders.

Many kayakers show up at the ocean with a whitewater kayak and find themselves among unfriendly, sometimes very unpleasant, board surfers. The problem is one of ignorance.

I believe many kayakers have no understanding of the rules associated with the sport of surfing. This is understandable. At Westport, Washington, I’ve seen kayakers literally bongo slide (trapped sideways in a high brace) over board surfers. I’ve seen kayakers drop in on surfers with no regard for wave etiquette.

What is not cool are the kayakers who say, “The waves are free; I can do what I want.” This attitude is common among kayakers, and it’s causing problems. But in some places, this ignorance will get you into serious trouble.

Kayakers would do well to know the rules, not only to avoid dangerous collisions, but also to show more respect for others. Following these rules has kept me out of trouble and allowed me to coexist with board surfers in California, Costa Rica, Canada and Washington.

1. When possible, surf places that are not popular with board surfers.

Surf boarders require a steep wave face for a drop-in take off. They typically have fewer wave choices than a kayak. Kayaks have the speed to catch waves early, while they are still steepening, and be on a wave before a surfer can drop in. This can be a problem, as the board surfers wait impatiently for a wave, only to see a goober in a kayak hopelessly out of control side surfing toward them. Not only have they lost the wave, they must avoid the kayaker who may have no idea they’re even there. This is worse if it’s a sea kayak that is prone to broaching and cuts a wide swath down the face of the wave.

2. Don’t drop in on surfers, board or kayak.

The person closest to the breaking shoulder of a wave (steepest part) has the right of way. Surfers actually line up and take turns grabbing waves at the break. Kayakers routinely take off away from the break on a building wave while a surf boarder is working across the peeling face, only to encounter a kayak that’s either stuck sideways or surfing straight ahead.

3. Be extra courteous around surfers.

Take some time to size up the situation. If they are working a peak (steep, building part of a wavetake off point), try to find another area. If it’s the only spot, wait your turn. Sometimes I’ll sit a bit in shore from the surfers and grab waves they miss. Other times, I’ll wait for my turn, take a late drop and enjoy the wave. It’s important, though, to have control if you play among surfers. If they see you competently working the wave, they’ll show respect.

If you appear out of control, they’ll get nervous and tell you to go away. Sometimes the wave is hollow and very fast, making it less suitable for all but the best kayak surfers in specialized surf boats. If I’m uncertain of my ability to maintain control on a given wave, I’ll wait until the crowd dies down so my inevitable wipeouts won’t harm anyone.

4. Paddle out in a manner that doesn’t put you in the way of an incoming surfer, and look for surfers paddling out when you’re surfing a wave.

5. If it’s a hot spot, arrive early and enjoy an hour or so of surfing before the board surfers arrive. If you arrive at a hot spot and find a great wave that is populated with board surfers, go elsewhere, come back later or ease your way in. In some areas, surfers sometimes feel they own the place and are just plain nasty.

However, my experience has been that this is rare, especially in the Northwest. It may seem as though I’m allowing board surfers to dictate my experience. Not so. I’m simply learning to respect a tradition that has evolved for a reason. A kayak out of control in crowded waters is a very real hazard.

Acquiring the right skills and playing by the rules will lead to more fun. You’ll learn a lot by being around the surfers, and most of them will appreciate what a kayak can do on a wave.